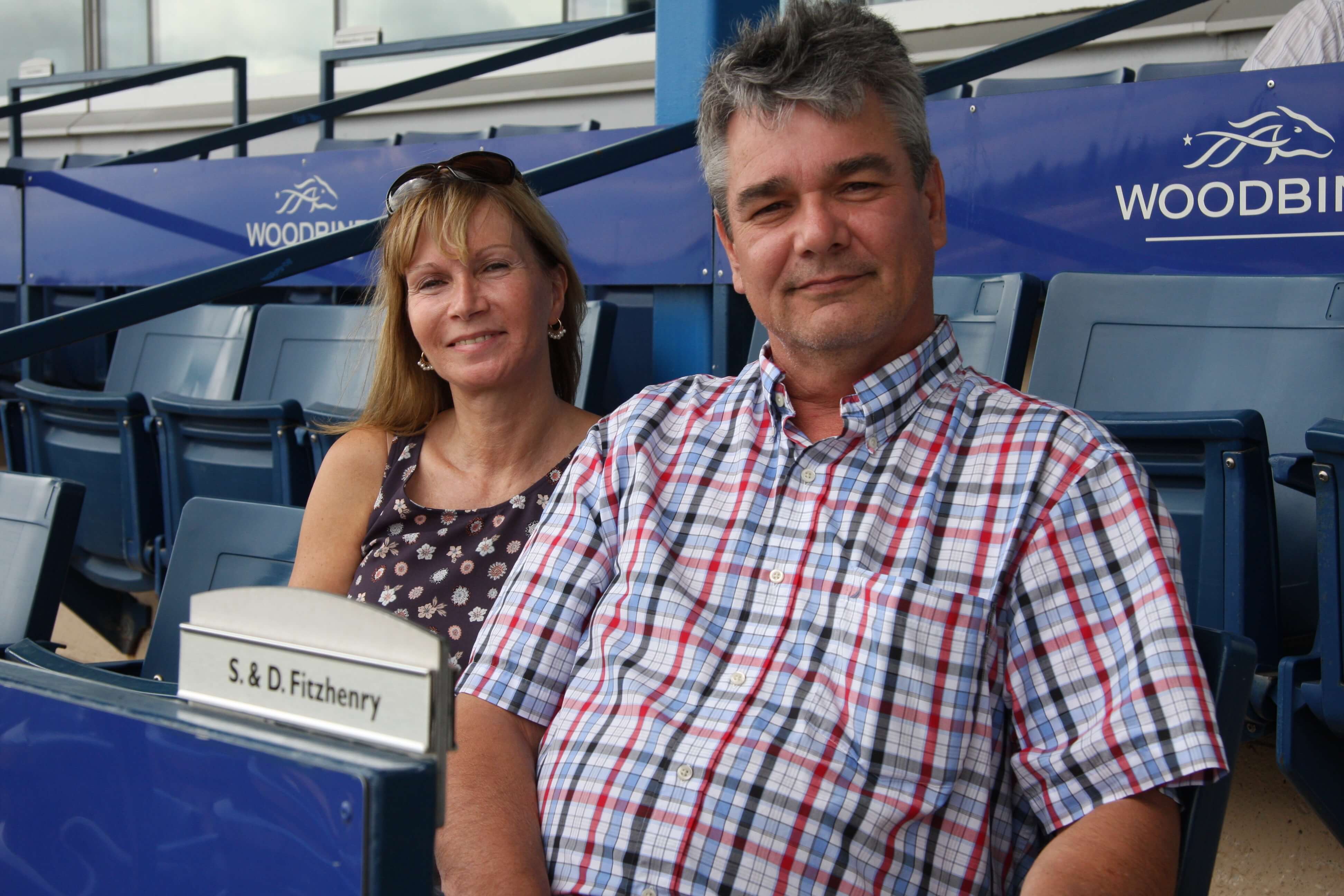 Dorothy has always loved horses and rode them when she was a little girl. When she met and married Sean, he recalls a promise to his new bride that one day he would buy her a riding horse. Three decades later the Fitzhenrys do indeed own and have owned several horses just not of the pleasure riding variety.

While Sean attended the races at Woodbine every now and again with his buddies, it was Debbie & Dennis Brown who brought the Fitzhenrys into the buisness. Cheering on the Brown’s racehorse, No Comprende, in early 2000’s, the talented gelding took them all on a journey as he competed in stakes and graded stakes races at Laurel, Hawthorne, Saratoga, Oaklawn and Woodbine racetracks.

Sean and Dorothy were hooked and they bought a couple of horses themselves to race yet it was the breeding side of the sport that proved intriguing and eventually yielded a new way of life for the couple.

The Fitzhenrys are fully immersed in commercial breeding of Thoroughbred racehorses with Sean getting out of the commercial real estate business to pursue his passion. They keep a total of ten broodmares. If at any time a new filly or mare is added it will be to upgrade and replace one of the ten in an effort to continually improve the quality of their stock.

All of the mares are bred to Kentucky stallions and their resulting foals are born in Ontario then run through the sale as yearlings in Kentucky with a reserve value. If the bidding falls short of the reserve, the Fitzhenrys bring the horse back to Canada to race themselves with Trainer Catherine Day Phillips.

Breeding with an eye toward selling, the Fitzhenrys enjoyed early success with the Ontario bred Marketing Mix by Medaglia d’Oro out of the Fitzhenry’s Kris S mare, Instant Thought. A winner of more than $2 million, Marketing Mix, won the Wonder Where, G2 Nassau and G2 Dance Smartly at Woodbine as well as G1 Rodeo Dr. and Gamely Stakes and was second in the 2012 G1 Breeders’ Cup Filly and Mare Turf.

Additional breeding fame has come from their Montjeu (IRE) mare Game (FR), purchased for $27,000 she has produced Broken Game (2011 by Broken Vow) a multiple stakes and award winner in Peru for owners Stud 9000, and Wonder Where Stakes winner Season Ticket (2012 by Lemon Drop Kid) for owners Woodford Racing LLC, trained by Mark Casse.  Most recently Game (FR) produced 2020 Breeders’ Stakes winner, Belichick (2017 by Lemon Drop Kid) who was also runner up in the 2020 Queen’s Plate after the Fitzhenry’s sold the colt as a yearling in Keeneland for $300,000.  The mare’s latest foal, Bill Needle (2019 by Distorted Humor) was RNA at the sale and currently has four works in 2021 for the Fitzhenrys under trainer Catherine Day Phillips.

Astrological (2018 filly by Malibu Moon – Dixie Chicken) sold as a yearling for $350,000 and is currently Stakes Placed in her first two starts out of the Mark Casse barn at Woodbine.

The Fitzhenry’s mare Mendocino Beano (Smart Strike) has produced recent MSW winner Conquest Fleetfeet (2013 by Afleet Alex); multiple Stakes winner Stallion Heiress (2014 by Exchange Rate); Tone Broke (2016 by Broken Vow) who was third in the 2019 Queen’s Plate, went on to win the second and third legs of the Canadian Triple Crown Classics, the Prince of Wales and Breeders’ Stakes.  Tone Broke’s full sister Sansa’s Vow (2017) was a winner in her second start at 2 and is working towards her first start in 2021 at Woodbine.

And their mare Morilles(GB)’s latest foal, Violet Jessop was sold and has recorded four good works at Woodbine in 2021.

“We have been improving and refreshing our broodmare band and our breeding operation is slowly starting to come around to the place we need to be. If I take any of them home from the yearling sale I am going to race them. Being very good friends with Richard Day, racing with Catherine was an easy connection.”

It was the Graded stakes placed home-bred mare Dixie Chicken (Rahy – Minnie’s Meadow), who was also trained and ran under Catherine and the maiden mare Tennessee Lamb that has given the Fitzhenrys their biggest personal racing thrills to date.

Basketball Jones is Dixie Chicken’s latest foal (2019 by Curlin), a full brother to Dixie Moon, and will race for the Fitzhenrys.  He currently has four recorded works at Woodbine with trainer Catherine Day Phillips.

Mr Havercamp (2014 by Court Vision) was the second of two foals out of the mare Tennessee Lamb. Trained by Catherine Day Phillips  Mr. Havercamp, was a multiple Graded Stakes winner who earned 2018 Sovereign Awards for Champion Older Horse and Champion Grass Horse , retiring in 2020 with 8 wins and 1 second in 14 starts and earnings of close to $850,000.

Other current runners for the Fitzhenrys in the barn of Catherine Day Phillips include:  Ballrooms of Mars (2017 by Mr. Speaker – Grey Pride) a maiden gelding working towards his first start in 2021; and Who Says (2018 by Quality Road – Queen Caribees) a filly who finished fourth in her first career start July 3, 2021 at Woodbine.

“Catherine is a great horsewoman with exceptional attention to detail. She has a very good staff and you won’t see a horse in her barn that isn’t perfect when going to race.”