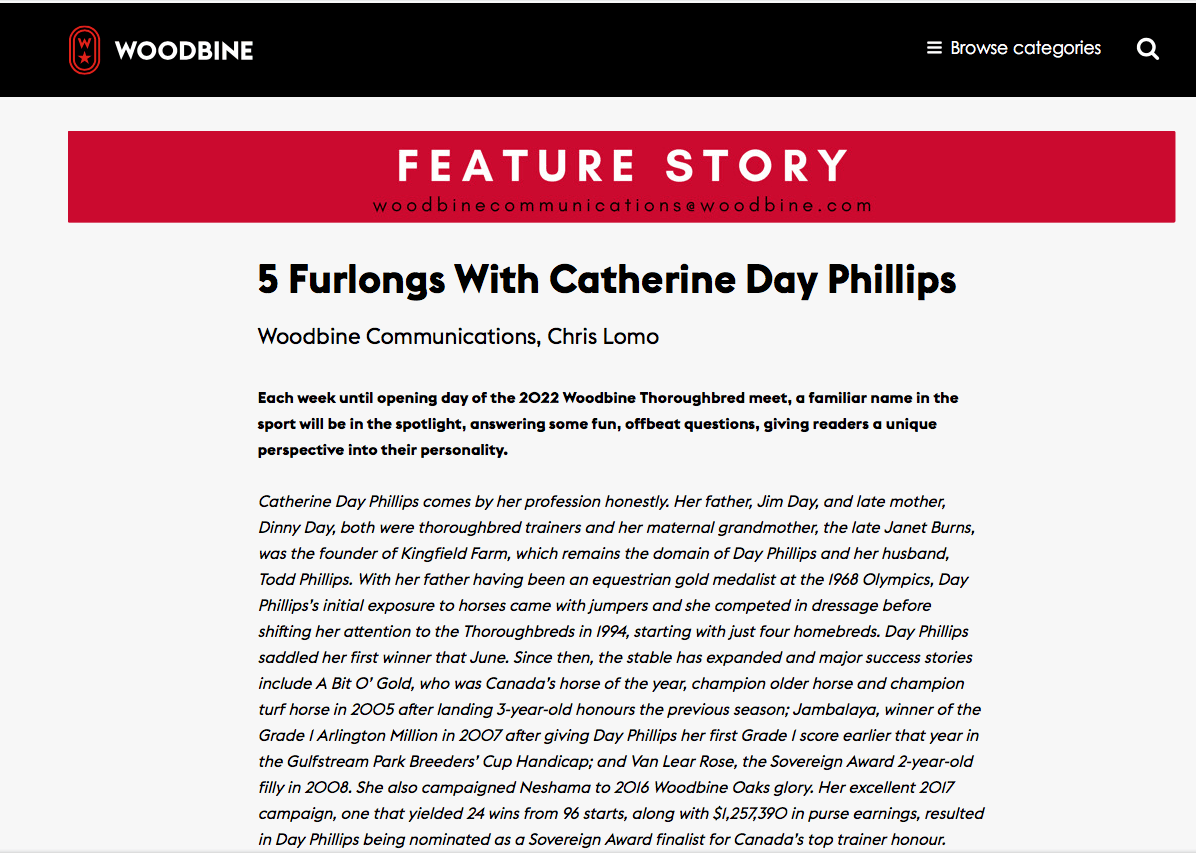 Each week until opening day of the 2022 Woodbine Thoroughbred meet, a familiar name in the sport will be in the spotlight, answering some fun, offbeat questions, giving readers a unique perspective into their personality.

Catherine Day Phillips comes by her profession honestly. Her father, Jim Day, and late mother, Dinny Day, both were thoroughbred trainers and her maternal grandmother, the late Janet Burns, was the founder of Kingfield Farm, which remains the domain of Day Phillips and her husband, Todd Phillips. With her father having been an equestrian gold medalist at the 1968 Olympics, Day Phillips’s initial exposure to horses came with jumpers and she competed in dressage before shifting her attention to the Thoroughbreds in 1994, starting with just four homebreds. Day Phillips saddled her first winner that June. Since then, the stable has expanded and major success stories include A Bit O’ Gold, who was Canada’s horse of the year, champion older horse and champion turf horse in 2005 after landing 3-year-old honours the previous season; Jambalaya, winner of the Grade 1 Arlington Million in 2007 after giving Day Phillips her first Grade 1 score earlier that year in the Gulfstream Park Breeders’ Cup Handicap; and Van Lear Rose, the Sovereign Award 2-year-old filly in 2008. She also campaigned Neshama to 2016 Woodbine Oaks glory. Her excellent 2017 campaign, one that yielded 24 wins from 96 starts, along with $1,257,390 in purse earnings, resulted in Day Phillips being nominated as a Sovereign Award finalist for Canada’s top trainer honour. Dixie Moon (two-year-old filly) and Mr Havercamp (three-year-old male), both bred and owned by the Fitzhenrys, were also on the Sovereign shortlist. As of February 3, Day Phillips has 309 career wins.