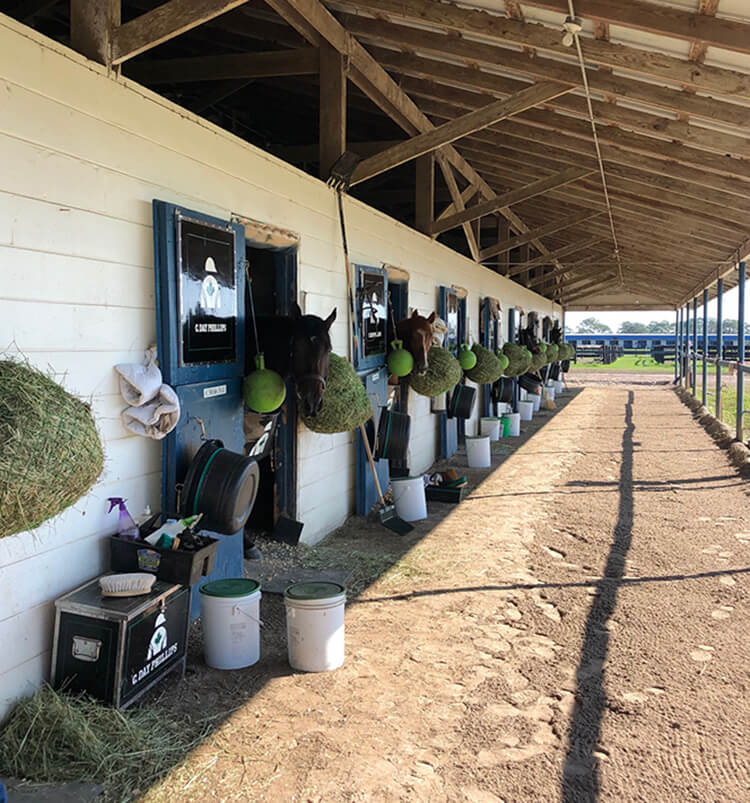 Coming off of a successful year in 2019, Trainer Catherine Day Phillips currently has a string of horses at Payson Park in Florida prepping for their starts in 2020.

In 2019 Catherine Day Phillips’s stable of young horses had their share of wins and places along with the returning stars who recorded additional wins in 2019.  With 111 starts, Catherine’s runners earned 16 victories, 14 seconds and 13 thirds with close to $930,000 in earnings.

After wintering at Palm Meadows and racing a Gulfstream Park for the winter with a string of horses Catherine returned to Woodbine in early spring and started off the season with 2 wins (Notice Me & Smooth Talk) and 3 places in the first 5 starts.

2017 Woodbine Oaks winner, Dixie Moon finished fourth in an Allowance followed by a third in the Trillium Stakes in the spring of 2019.  The Champion mare was retired in September by the Fitzhenrys to join their broodmare band after two additional out of contention starts later in the season.

Doug Anderson, Rita Eskudt, Peter Mosakos, Kingfields Racing Stable and Carnegie Hill Stable’s Split My Pants, finished off the month of June with a $67,500  Allowance win for the partnership.

2018 Sovereign Award Champion Turf Male and Champion Older Male, Mr. Havercamp, got a chance at redemption when he returned to New York to compete in the (G3) Forbidden Apple Stakes for Trainer Catherine Day Phillips and owner/breeders Sean and Dorothy Fitzhenry.  Finishing fourth in last year’s edition, the race was bumped up from a listed to a Grade 3 Stake and hosted at Saratoga Racecourse in 2019.   Mr. Havercamp had a clean trip on the inner turf and with a determined effort in the stretch got up for the win.

Three year-old filly, This Round’s Mine, broke her maiden for $40,000 in July for PA Fullerton Inc. and Kingfields Racing Stable also Mark Breen’s four year-old Killag Katie was an Allowance winner in August.

It was the two year olds that took the spotlight beginning in July with gelding, Keep on Truckin’, impressive in his debut July 7 with an eleven length win to break his maiden in style.  That effort was followed by a 7-3/4 length romp in the Clarendon Stakes in early August for owners George Ledson, Brian Ledson and Anderson Farms Ontario Inc.

Two year-old gelding Barilko was an impressive winner in his first start, winning in Maiden Special Weight company at the end of July and also finished second in the Ontario Racing Stakes in September for owners Anderson Farms Ontario Inc., George Ledson and Scott Kelly.

Nick Harris’s two year-old , La Paquita, recorded her first career win in her second start in September with a driving 2-3/4 length win for $40,000.  The partnership of John Fielding, Don Meehan and Peter Kirby enjoyed a $71,000 MSW win with their two year-old colt, Green Growth at the end of September.

Two year-old fillies Artie’s First Kiss, owned by Hubert Vester and Mustn’t Grumble owned by All My Hart Racing Inc. both had a win and a second in their two starts each in 2019.